CLOSE
report
business
Virtual Tour Software
Creators
Future Signs
RICOH360 Tours
About THETA
Contribution
How to use
Blog
Interview
TOP
>
Interview
>
Make the most out of your time at home: live streaming with the THETA 360 degree camera!

Make the most out of your time at home: live streaming with the THETA 360 degree camera! 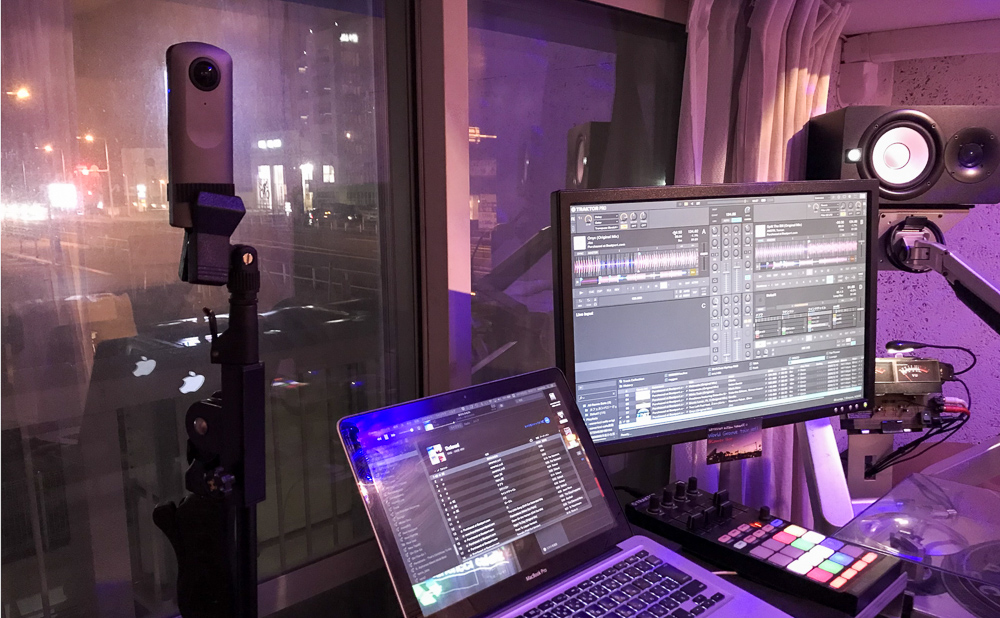 These days we are stuck at home, so people’s lifestyles are changing.

We interviewed DJ Sanekata from Sanricci cafe, who started 360-degree live streaming using THETA. We got the story behind his exploits!

The motivation for live streaming with THETA

What kind of work do you do at Sanericci cafe?

We send DJ/PAs to direct events and weddings, and provide sound design. We also produce BGM and other sound sources at our seaside home studio.

View from the rooftop of his apartment with a home studio

Please tell us why you got interested in live streaming with a 360-degree camera and eventually purchased THETA.

Due to Covid-19, we had to avoid going out, and all the jobs we had planned until then, such as weddings and events, were postponed.

I thought this stay-home period would continue for a while, so I decided I’d do what I could in this situation, which was streaming music on YouTube.

I used to do web streaming using a normal webcam once in a while, but just doing the same thing as before would be boring. I remembered I’d seen the live stream of a club DJ on YouTube which was shot with a 360-degree camera, so I considered doing it as well.

When I first saw the 360-degree live stream on YouTube, I was really impressed. It felt as if I was actually in the club.

There are other 360 degree cameras besides THETA, but what made you go with THETA?

I purchased THETA after much research online, collecting lots of information. What I cared about the most was easy distribution to YouTube, the design, and the size.

I considered a lot of other 360 camera manufacturers, but my research led me to purchase THETA V because of its easy connectivity with YouTube.

THETA V is very cool with its black finish and I really like the design of the blue light when the power is on.

Was it easy to set up YouTube live streaming using THETA V?

Yes, it was. I was able to set it up without a hiccup by referring to the THETA V live streaming procedure guide on the official THETA website. I use a Mac and installed OBS Studio for streaming.

I looked up some blogs and YouTube tutorials about live streaming with THETA, and they were helpful.

Please tell us your impressions when you actually tried live streaming with THETA.

It is very easy to use and I’m super satisfied!

I simply connect THETA to my computer with USB, and as soon as it activates, it is available via OBS and allows me to stream on YouTube. Basically, it’s as though THETA can be used like an ordinary webcam. Since it is connected to the computer, I can record the stream as is.

*For smartphones, click on the video title at the top of the screen, jump to the YouTube app with “open app”, and swipe to look around in 360 degrees.

Yes, I knew that THETA could be used to stream in 4K, but due to my computer specs and bandwidth issues I gave up on high image quality this time. This is to prevent any lag during the stream, because my internet connection is shared with the rest of the apartment building I live in and it can get pretty slow at times.

In the future, I would like to try 4K if I could solve my internet problem.

When I actually watched it, the sound was very clear. How do you stream the sound source?

Music from my Dj setup and microphones is streamed directly from the PA mixer to the computer via the audio interface.

The value of 360 degree live streaming

What was the audience reaction to your 360-degree live stream?

I stream from my studio at home. Some viewers of the stream told me, “it’s fun…as if I’m in a virtual studio.”

What do you think is the good point of live streaming in 360 degrees?

In a 360-degree space, audiences can choose their focus according to their taste. So, I think the strong point of 360-degree live streaming is that it allows you to open up the possibilities for the audience’s perspectives.

*For smartphones, click on the video title at the top of the screen, jump to the YouTube app with “open app”, and swipe to look around in 360 degrees.

This studio faces a street along the coast. So, those who want to look at the view outside while listening to music can see the view through the window by adjusting the perspective.

On the other hand, those who are interested in DJs can see my hands operating the decks, while other people can focus on the singer.

In what kind of scene would you like to use THETA’s live streaming in the future?

Taken with THETA: On the rooftop of his condo and studio

Since we are in a stay-home period for now, the main place to stream is indoors, but I’d like to try out 360-degree streaming in the beautiful outdoors at some point. I think it would also be interesting to visit an artist friend’s place and stream from there to create an atmosphere where people can pay a virtual visit to their studio.

If you have any requests regarding THETA, please let us know.

However, when I mount THETA on a tripod, the USB connector on the bottom is blocked, so I had to pinch THETA with a mic stand I have laying around and, with a slight offset, I was to be able to connect the USB cable.

So, I thought it would be nice if the USB cable could be connected easily even while THETA is mounted on a tripod.

In fact, the TE-1 extension adapter that connects the tripod and THETA allows shooting with a USB cable plugged in.

Please try this next time.

* An adapter that allows you to use a tripod with a cable connected to the USB terminal or HDMI terminal. It can be used together with a tripod for long-term interval shooting that requires a constant power supply, or for live streaming connected to a computer.

Thank you for your story about 360-degree live streaming! We look forward to more streaming using THETA! 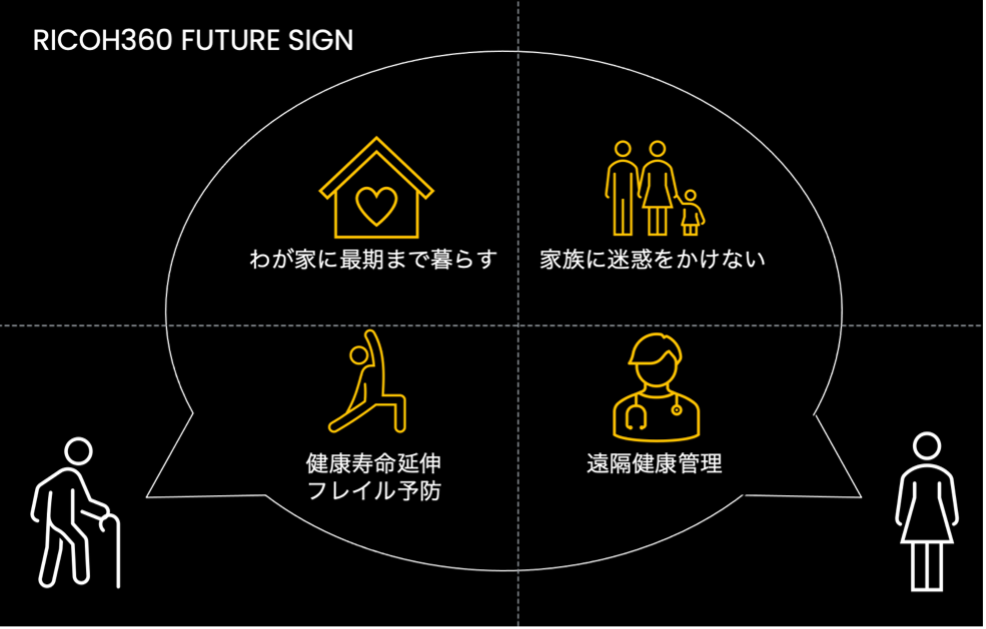 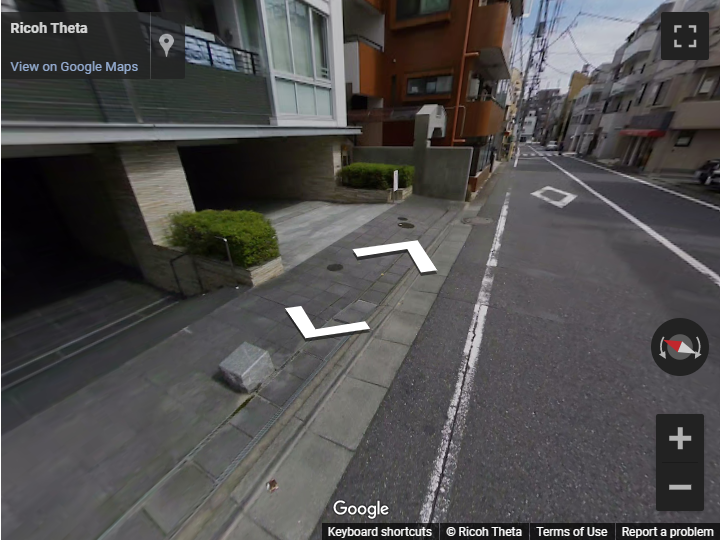